What are printed circuit boards made of?

When we talk about the different “layers” of a PCB, we are talking about how many copper layers they are made of. For example, a single-sided PCB has only one layer of conductive material on one side. In this case, the other side of the board is used to incorporate different electronic components. Meanwhile, a double-sided PCB will have conductive copper and components on both sides of the board.

The thickness of the copper layer will depend on the amount of power that the PCB needs to withstand. PCBs that need to handle higher power levels will have thicker copper layers.

Solder mask
The solder mask is on top of the copper and gives the green color to most PCBs. This layer insulates the copper and ensures that it does not come into contact with any other elements.

Silk screen layer
Adding the silkscreen layer is mainly for the benefit of mankind. It involves adding letters, numbers and symbols to the board to make it easier for users to understand the functions of the different pins and LEDs.

What PCBs exist and what are they made of?
A PCB consists of conductive and non-conductive layers that are glued together. However, the PCB materials used in the manufacturing and assembly process may vary depending on the purpose of the board and the needs of the customer.

Each type of PCB includes different PCB materials. With that in mind, let’s examine the most popular PCB types in more detail and outline the key benefits they offer.

Single-sided PCBs are very common due to their simple design and cost-effective nature. Although the manufacturing process is simple, they can still be used in many complex electronic devices, such as audio equipment, printers and vending machines.

Unlike single-sided PCBs, double-sided PCBs can have conductive copper mounted on both sides of the board. This allows for tighter routing traces.

Components on the two boards are connected by surface mount technology or through-hole technology, depending on your product needs. All common layers used in single-sided PCBs, such as substrate, copper layers, silkscreen, and solder mask, are used in double-sided PCBs. However, they apply to both sides of the board, not just one side.

Double-sided PCBs are very popular due to their ease of use and flexibility. This is partly because they allow for more complex circuits, which means they can be used in more advanced electronic systems, such as lighting and car dashboards.

These PCBs are built using a “sandwich model” with a large number of double-sided conductive layers separated by a corresponding number of sheets of insulating material. They are bonded and laminated together under high pressure.

Rigid PCB
As the name suggests, rigid PCBs are strong and inflexible. They are made of several different layers that are joined together using adhesive and heat. Rigid PCBs can be single-sided, double-sided or multi-layered upon request.

Rigid PCBs are cost-effective and can be produced in high volumes. They are also very wearable. As such, they are often used in products and industries where it is critical that components remain fixed. 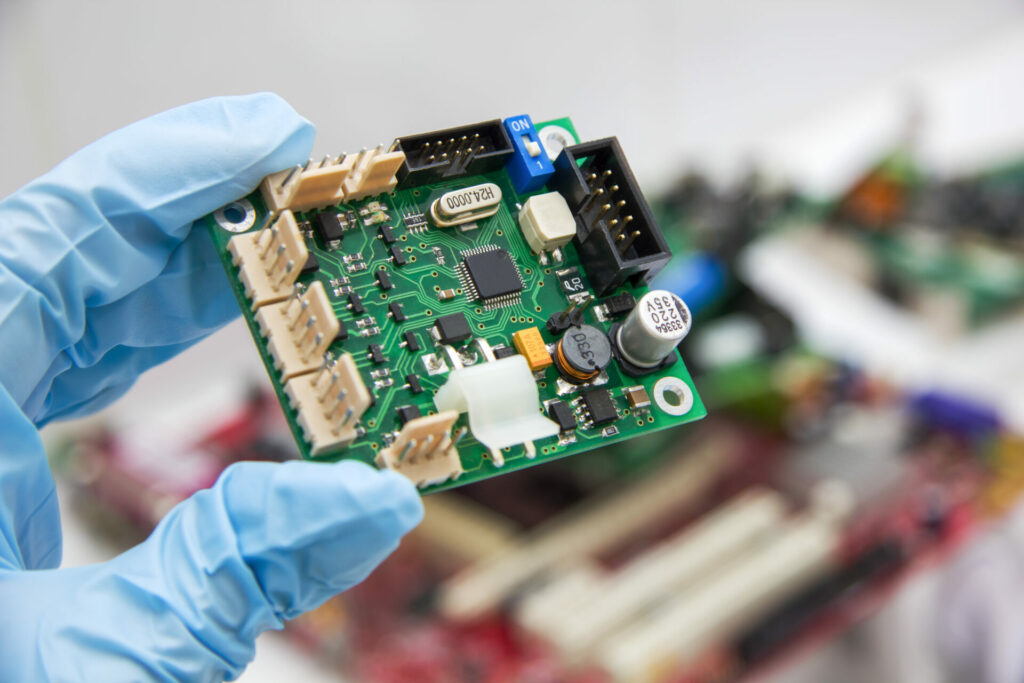 Flexible Printed Circuit Board
Flexible PCBs, also known as “flex PCBs” or “flex circuits”, are designed to fit into a device or product. As a result, flexible PCBs are typically thin, lightweight, and work well in tight spaces and contoured shapes.

Flexible PCBs are popular because they don’t take up space like other forms of PCBs. They can also withstand extreme temperatures and are compatible with a wide variety of components and connectors. Best of all, their inherent flexibility allows them to bend to fit your product.

Compared to more traditional circuit boards, HDI PCBs have higher circuit density. In addition, HDI PCBs have blind and buried vias, as well as smaller diameter microvias. This means that designers are also able to place smaller components more closely on the board, allowing for faster signal transmission and less signal loss or crossover delay.

For these reasons, HDI PCBs are compact and have fewer layers than multilayer PCBs. However, what HDI PCB lacks in size more than makes up for in quality. Therefore, they are popular in advanced technology systems such as smartphones and game consoles.

LED circuit board
LED PCB is a specific type of printed circuit board designed for use in various lighting modules and applications.

When manufacturing LED PCBs, multiple light-emitting diodes (LEDs) are mounted on the PCB and form a complete circuit. This allows full control of their behavior via various switches.

Therefore, LED PCBs are used in countless industries to control lighting. For example, they are used in automotive lighting, street lighting, flashlights and work lights.

blank printed circuit board
A blank PCB is exactly what it sounds like: an empty circuit board with no components installed to create a functional circuit board.

Blank PCBs are also sometimes referred to as “copper clad circuit boards” due to the visible copper layers. This copper plays a vital role. It ensures that the board will have an efficient and efficient flow of energy when components are placed on the board at a later stage.

Although some people believe that blank PCBs are made entirely of copper, this is not accurate. To ensure that the blank PCB remains durable and strong, silicon and other materials are also used in the process. These also ensure that the PCB is rust-proof.

A blank PCB is the basic foundation for securing components and parts. These boards are very popular with companies that have the skills to assemble and manufacture printed circuit boards, but need to start with a blank canvas.

Custom PCB
We can also provide a fully custom solution in the form of a custom PCB if it better suits your project and needs.

Custom PCBs are now a popular solution. This is especially the case if the design of the PCB needs to be complex, or the budget needs to balance labor and manufacturing costs.